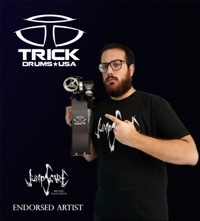 Born on the 6th of November 1996, he always loved music (and art in general) since his childhood years.
In 2006 at the age of 10, he started to take classic guitar lessons with M°Angelo Palladino, but after a few months, he decided to quit lessons because classic guitar didn't fit with his musical tastes and style.
He stopped his passion for the music until 2012 when he started as a self-taught drummer in high school years.
Few months later he started to take some lessons with M° Mario Gervasio at "Accademia Della Musica Brusciano" (only for a few months), after that he continued his studies by himself.
He started concerts/studio and live sessions with his bands Hermes Band (Pop Rock) and Dharma (Alternative Rock),he started to collaborate with local bands and musical projects in his area,also he worked as drum technician in local events and clubs.
In 2013 Dharma was the supporting act of Pepp O'Blues and the renowed rockstar Pino Scotto (Vanadium) at Beer Festival of Pomigliano d'Arco (NA)
In 2014 he started to take lessons with the jazz master Leonardo De Lorenzo and he became "World Family" endorser of the company FACUS DRUMINNOVATIONS (with many important italian drummers like Tullio De Piscopo,Marcello Surace,Maurizio Dei Lazzaretti Etccc)
In 2015 , Hermes was the main support of Le Strisce (EMI Music Italy) at Torricelli Art Festival in Somma Ves.na (NA).
Later he joined Dreamcatchers (Acoustic Trio) as percussionist.
In November 2015 he founded his main project Jumpscare (Alternative Metal). In 2016 he started to collaborate with Live To Rock as staff member.
Meanwhile He continued his studies as self-taught drummer.
In 2017 He collaborated as session artist for the HOLLYWOOD based alternative metal band THE MAENSION.
During the 2017's summer He founded "Axis Mundi" .
For all 2017 Jumpscare toured across Italy and shared the stage with some importants acts as Edu Falaschi (Angra), Giacomo Voli (Rhapsody Of Fire),DGM,Teodasia,Secretsphere,Arthemis, Despite Exile etcc.. and played in the best venues of Italy as Legend Club of Milan.
In 2018 he started to take lessons with David Folchitto (Fleshgod Apocalypse,Stormlord,Screaming Banshee,Gravestone) and from Norman Ceriotti (Ego The Enemy,Roll 4 initiative) and he started to teach in his studio called "Vault Lab".
In 2018 AxisMundi splitted and he collaborated with the Neapolitan HC band "Zero Eight One" right after thier Orange County tour in support of IGNITE,LAST LIGHT and many veterans bands of O.C. hardcore scene .
In September 2018 Live To Rock evolved in Impatto Rock Agency, and Graziano continued to be part of the staff.
Jumpscare started to endorse Dirtbag clothes (that endorse artists like Slipknot,Paparoach,Bumblefoot and Halestorm etc...).
At the end of 2018 at Graziano signed with the italian based drumsticks company EVO Drumsticks and he also signed to Diril Cymbals. He also started an artistic collaboration with the luthier Alessandro Respighi of Respighi Drums.
In January 2019 He was involved in the recording session of the first Jumpscare album at Sonitus Studio of Crema with the producer Tommaso Monticelli (Genus Ordinis Dei).
In March 2019 He started the collaboration with the italian street team of Famous Stars and Straps Clothing led by Travis Barker (Blink 182).
In August 2019 he became TRICK DRUMS pedal artist among musician such as Alex Rudinger (Whitechapel, The Faceless, Session), Mike Terrana (Vision Divine, Tarja Turunen, Malmsteen and many more), Art Cruz (Lamb Of God, Winds Of Plague, Prong), Kevin Paradis (Benighted, Session), Nicky Bellmore (Dee Snider, Toxic Holocaust), London May (Samhain), Russ Miller (Multi Platinum session artist), Brent Taddie (Crown the Empire) and many more
He started his own Drumzine with Impatto Rock called IMPATTO ROCK DRUMZINE and he started to review and interview artists, brand CEOs and music journalists as Mike Ciprari of SJC Drums, Gabriele Beatrice of Janara Drums and Distribution and Noel Smartf from SICK DRUMMER MAGAZINE and much more
2013 - Puoi Sentirmi (Dharma - Single)
2015 - Hermes Promo (Hermès - Demo)
2015 - Broken Lands (Jumpscare - Demo)
2016 - Three Marks Of Dreams (Jumpscare - Ep)
2016 - Chthonic Dreams (Jumpscare - Split with Bormanus and Troy Of HERR)
2017 - Sowing Storms (Jumpscare - EP)
2019 - Don’t Close Your Eyes (Jumpscare - Album)
2020- A Tribute To Slayer Compilation by AntiChrist Magazine (Jumpscare - Compilation)