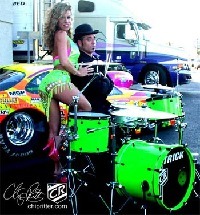 Chip Ritter is a Teacher, Author, Artist, Musician, Performer, Entertainer, and Showman, Best known for his Stupid Human Tricks on The Late Show with David Letterman!

In July of 2019 (this summer) Chip will be doing a Drum Clinic Tour of China, and promoting the release of his new book “Stick Tricks + Showmanship”

His career highlights include:
Being recognized as one of the Top 500 drummers of all time on Drummerworld.com
http://www.drummerworld.com/drummers/Chip_Ritter.html

Chip Ritter Juggling Drumsticks while performing with Drummers at Drummers For Jesus
https://www.youtube.com/watch?v=UPKskYNKGv4